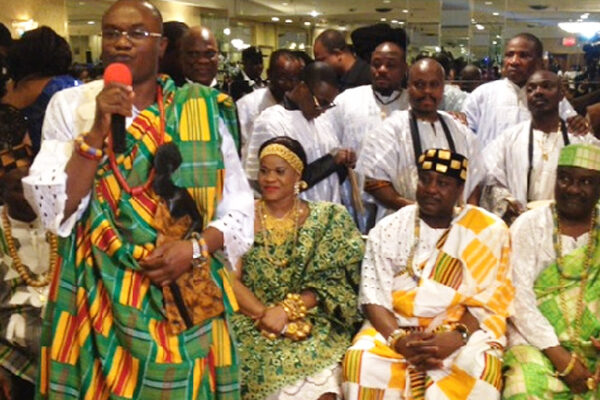 The United Volta Association (UVA) at their Annual Dinner Dance on Dec. 28, 2013 killed two birds with a stone by swearing in Mr. Napoleon Sefordzi as the new President and re-affirmed the current Queen-mother Mama Mawutor Akabua (a.k.a Ms Perfect Corneh) when they took the oath of Office administered by Lawyer John K. Akpalu, at a colorful ceremony that saw exhibition of indigenous Ewe arts and acts that mesmerized attendants at the prestigious Maestro’s Caterers Auditorium, Bronx NY.
UVA is one of the oldest non-profit self-help organization headquartered in New York City with membership from both Ewe and non-Ewe speaking people from Ghana, Togo and to minimal extent—Benin, conglomerated around the tri-state suburbs of New York, New Jersey and Connecticut.
The out-gone president –Mr. Lloyd Ledlum in his handing-over remarks, expressed his heartfelt appreciation to members for their hardworks and demonstrating high sense of unity, peace, and tolerance during his four-year tenure. He further pledged his support and readiness to assist the new administration whenever called upon either “day or night, rainy or snowy weather, I will be there for you” he assured. On her part, Mama Mawutor pledged to work hand-in-hand with the President and the executives to champion the objectives of the association. She promised to continue her “Mother-for-all” agenda and lead the women caucus to inculcate their children with our cultural values and customs. Mama indeed walked her talk by dancing splendidly to the live traditional “Akpi” drumming by the UVA Cultural Troupe which drew standing ovation from the crowd.
In his inaugural remarks, Mr. Sefordzi (n.k.a Torgbui Sefordzi) who responds to the appellation “ Afor tu de, me mua de o!”, an Ewe adage loosely translated as “ No matter how hard the palm tree is kicked, it cannot be uprooted”, foremostly thanked God for the occasion and expressed gratitude to members for their mandate and the confidence impose on him. The vociferous and exuberant President urged the youth to come aboard the “UVA flight” for harder works towards unity–which he described as the needed key to maintain the club as the pace-setter organization that others will continue to emulate; and make the club more appealing to non-members. “This is the era of the youth!” he proclaimed passionately. In his bid to reach out to sister organizations, Torgbui urged continuous collaboration which he sees as the catalyst in pursuing developmental agenda that will benefit “our people at home”. His final bite was the need for members in particular and Africans in general to preserve and showcase our rich cultural and traditional values to our hosts—wherever and whenever!
Mr. Sam Atsu Agbenu and Mr. John Nkegbe were elected Secretary and Treasurer respectively. By-election will be conducted to fill vacant positions. Indeed, we were (and we are) “United” and in this unity, we found our “Strength”.
As witnessed by: Frank Goka.
Frango2001@yahoo.com