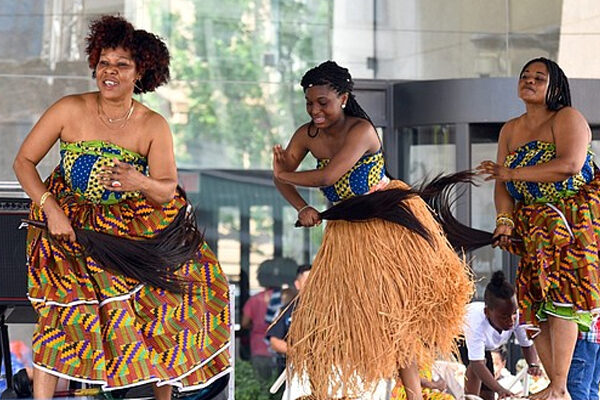 A New York City-based African nonprofit socio-cultural organization known as the United Volta Association Inc., popularly referred as UVA, in conjunction with the African Studies faculty of Binghamton University, put up a splendid performance to mesmerize the audience gathered at the Adam Clayton Powell State Building on 125th Street last Saturday, July 8, 2017, at an African cultural show. The concert, dubbed the Pre-CEANA African Cultural and Arts Exhibition Expo, charged the atmosphere with skillful displays of various repertoires of African drumming and dances interlaced with live-band African music and dazzling acrobatic displays and illusions. The occasion was meant to bring the association, founded in October 1996, outdoors and to showcase the indigenous traditions of Africans, especially the Ewe traditions from Ghana, Togo, Benin and part of Nigeria. Also, and worth noting, the event was used to create awareness in the general public of our pending 24th annual Convention of Ewe Associations in North America festival slated for Aug. 31 to Sept. 4, 2017, at Westchester Marriott Hotel, Tarrytown, N.Y. The CEANA is the mother organization of all the Ewe associations in the North American geographical areas. Its core objective is to supplement the developmental projects and poverty-reduction ambitions in Eweland by the respective governments in Ghana, Togo and Benin through yearly rotational fundraising conventions among member associations. This year, UVA has the mandate to host the event under the theme “Improving Healthcare Delivery System in Eweland,” from which proceeds will be channeled to construct, equip and support health care related projects. Past CEANA projects include building new schools, supplying school logistics, construction of boreholes for good drinking water, health fairs and many more.

The performance in Harlem was to gather the “firewood” to light the “fire” in Tarrytown!